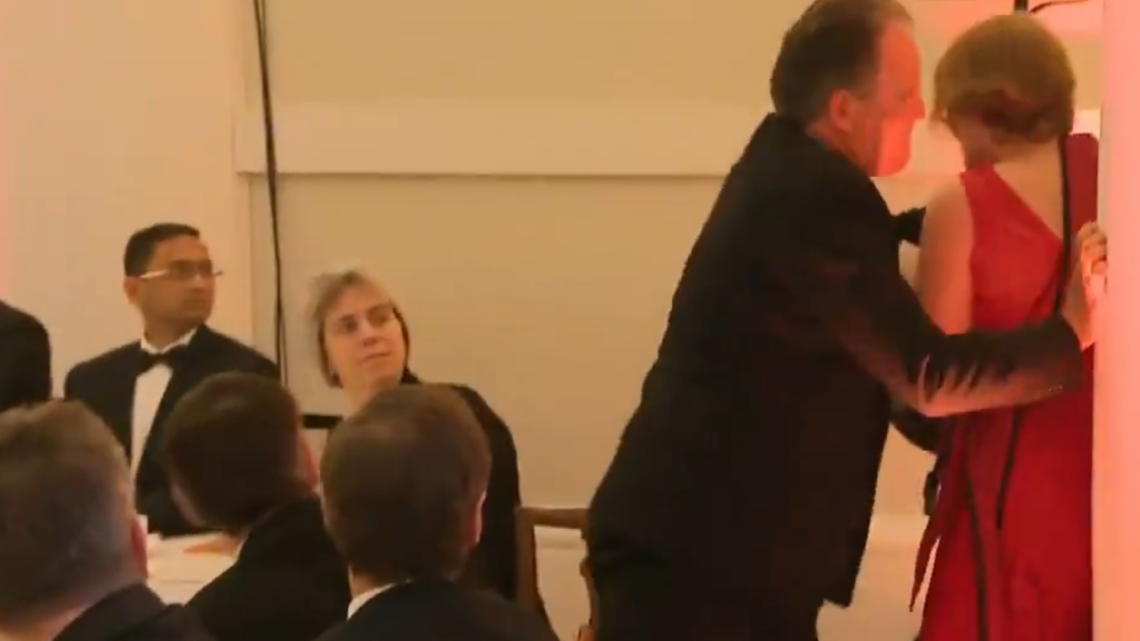 I’ve said it before and I’ll say it again. Why, when I learn of a Conservative MP I’ve never heard of before, is it because of something utterly abhorrent?

Last night, Chancellor Philip Hammond stated the bleeding obvious, by making a speech warning the future Prime Minister that crashing out of the EU is a fucking stupid idea, to a room full of self-congratulating cunts.

Climate change protesters ‘stormed the event’ by (looking at the video) standing in silence.

Seeing one particular stationary woman as an immediate threat, Foreign Office minister Mark Field quickly turned around, pushed her into a column, then forced her out of the room by the scruff of her neck.

He insisted he was acting on instinct, but you can see pure rage in his eyes in this picture;

This isn’t the face of someone who is mentally stable.

What’s even worse is the sea of complicit expressions sat at the tables behind him, on the faces of his fellow tories and others at the even.

I honestly think he could have kicked that poor woman to death before someone stepped in and said “that’s enough old bean.”

Of course he’s being defended by equally offensive arseholes, most notably, vomit filled condom, Jim Davidson. If that cunt has your back then you’re on the wrong fucking side.

What we’ve learnt is this; A comedian making a joke, or a member of the public throwing a milkshake is akin to terrorism, and must be investigated immediately by the police.

But physically assaulting a female is ok, providing you feel threatened and you apologise for being a tad heavy handed, which is the narrative that will probably be peddled by the BBC today.

This isn’t ok. It can’t be justified, but they’ll try, and by Monday it will be old news.

Watch the video yourself and make up your own mind.