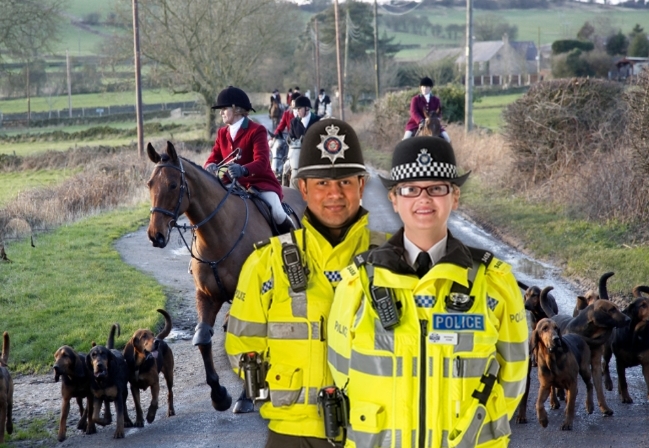 We have a long standing tradition in this country of police intervening when they see a crime happening in front of them, except for fox hunting of course. After all, arresting Lady Smithington-Smythe in front of her peers would be embarrassing.

It’s much easier to haul in a few filthy hunt saboteurs with their dangerous cameras, and just let Lady Smythe guffaw like a fucking chimpanzee with a torch everytime she sees helpless animals being torn apart.

Let’s put aside the barbaric ‘sport’ for a second. Even though I don’t get it, I could write about it all day. Tradition? I don’t know about you, but my boxing day traditions include holding in farts, swearing at the shitty tv and hoping people leave.

What do these people do on Christmas eve? De-feather a live budgie for shits and giggles before a fucking game of Pictionary?

I digress, let’s get back to point of the rant. When it comes to fox hunting the police are as much use as a fucking blue passport without freedom of movement.

I know they’re under funded and under manned blah blah blah, but surely this would be the perfect time to get some fucking revenge for that?

To rip those tory bastards off their horses and arrest them for breaking the fucking law, to humiliate them, instead of maybe looking into it three days later after they find a fuck tonne of dead foxes and people start handing in grainy footage.

If I were in charge of the police I’d have all available resources at these so called hunts. After all, what else is happening on Boxing day? Most normal people are too full of cheese and self loathing to commit crime.

The truth of it boils down to, as always, privilege. Do you think if a gang of council flat teenagers had a tradition of kicking cats to death every Christmas that the police would just allow it?

Would they fuck. But why? It’s probably less barbaric, it wouldn’t be such a massive strain on resources and no horses would break their fucking necks, but let’s face it, these imaginary cat murderers would be in a cell quicker than the flu virus in an interviewee.

Fox hunting may as well be legal, and every time the police turn a blind eye they make a mockery of British law and just reinforce the notion that we have a two tiered justice system.