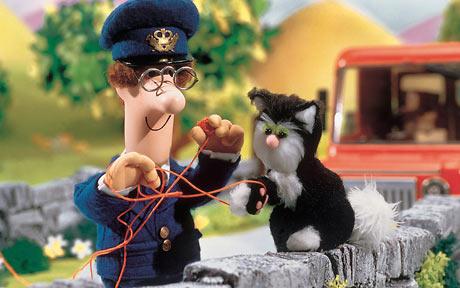 The Daily Star reported yesterday that Mrs. Goggins has suffered for years at the hands of lovable Postie Patrick Clifton.

Clifton, or Postman Pat as he’s better known, has for decades portrayed himself as an upstanding member of the Greendale community, a loving husband, generous father, and an animal loving hard working pillar of the community.

All of that changed yesterday however, after his work colleague and confidant of years, Mrs. Goggins, shockingly exposed him as being an ‘agressive lecherous animal’ behind closed doors.

“He’d stand outside stroking Jess as we locked up for the night being all smiley and chatty with the punters, but as soon as we were indoors all of that changed, he’d throw her to the ground and kick her across the room before demanding a cup of tea from me and calling me a bitch. He was a real Jekyll and Hyde character.”

Mrs. Goggins was inspired to speak out in the wake of the recently Hollywood sex scsndam and also alleges;

“He was a pervert. It started years ago with him pinching my bum. He said it was just for a laugh but I knew then it was plain wrong. After that it just esculated, in later years he would nose me on the counter after we’d closed for the day”

Greendale Police have launched an investigation. More to follow.