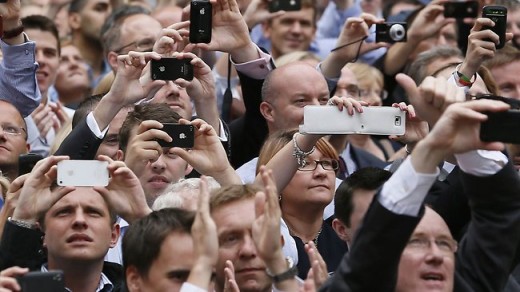 We’ve hit rock bottom as a society. We’re more devolved than fucking Scotland after a paddy, and it’s all because of the thing you’re reading this shite on. The ironically named smart phone, a device invented to enhance all of our lives and to make the acquisition of knowledge instant.

Quite fitting really, when you consider that its turned us all into fucking callous, socially inept wankers. Steve Jobs isn’t spinning in his grave. I’d know if he were because there’d be some cunt filming it.

We walk around, ear buds in, with our slack jawed faces lit up like fucking Queen in the Bohemian Rhapsody video, paying no attention to our environment like some sort of fucking techno zombies from a dystopian future turned real;

“Grandad, why didn’t you protest the government burning all the poor people?”

“Because I was tending virtual sheep Johnny, on my virtual farm, like an actual fucking dick head.”

The collective consciousness has deteriorated so much now that we’re like the Borg with fucking learning difficulties. On social media and in actual reality we’ve been reduced to a vicious pack of mentally stunted morons, who attack anything they don’t understand like the fucking English Defense League in an ethnic market.

I say we of course, but most of us are silently watching on in horror as no one gets that Barry Gibb joke on Twitter, or everyone on your friends list shares an obviously fake news story about a baby surviving a fire two weeks after it happened. It would be funny if it weren’t so fucking depressing.

People used to help each other in trouble. Now they just film it, separating themselves from the horror unfolding in front of them by viewing it through a 5″ screen. Recenty people have even filmed other people getting raped for fuck sake. What is wrong with the world?

Remember this though. When it does all get too much for you, when you’ve lost all hope in civilisation and you’re standing on that ledge ready to jump, take a deep breath and smile, because as you hurtle to your death, the last thing you’ll see are hundreds of goading, gawping cunts, filming it all on their smart phones.