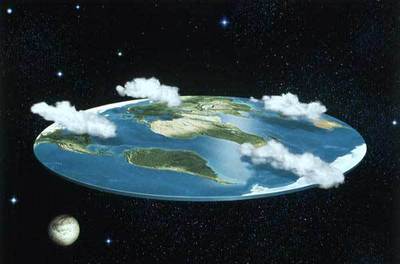 People think the earth is flat in 2017

Since the 15th century its been generally accepted that the earth is spherical, yet the the idea of it being flat refuses to die like Rolf Harris, or the socks and sandals combo. Yes, in 2017, as we regress as a species quicker than an AA member having ‘just the one’ in a pub, this idea lingers and grows like an American with a pocket full of free burger vouchers in a McDonald’s.

The Flat Earth Society is actually a thing, and ironically it has members all around the globe. Hundreds of thousands of thick as pig shit, lobotomised, brain dead cunts who value a YouTube clip of a prick with a spirit level on an aeroplane, over hundreds of years of research from the greatest minds on the planet.

These are the same pricks who avoid tap water, deny the holocaust, treat themselves with homeopathy and think that the next iPhone will have a new feature. They’re more deluded than one of those 18 stone grandmothers you read about, who meets a 23 year old body builder in a far away land, marries him, then sells her house and sends the proceeds to his family only to never see the cunt again.

What did we expect in this post truth, alt fact, fucking ‘who needs experts’ utopia that we’ve created for ourselves? I don’t subscribe to the echo chambers theory. I think there are lots of groups, yes, who stay in their own little bubbles. But then I think there’s a massive majority of us, like minded people, silent in our horror, with perminant hand marks on our faces. We’re brow beaten, world weary and absolutely sick to the back teeth of stupid fucking cunts.