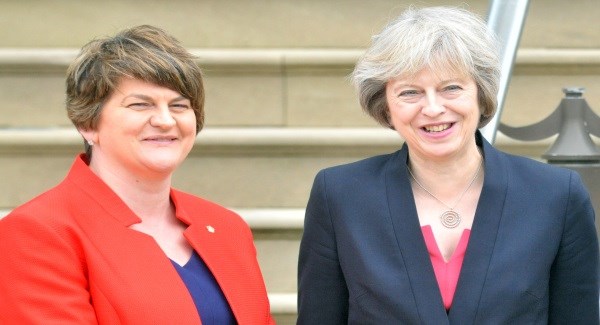 Just a few weeks after Theresa May’s attempt to strengthen the Tories hand collapsed like a fucking Glastonbury reveller after Corbyn ascended the stage and healed the sick, the ultra right wing party are now allowing themselves to be propped up by the DUP.

Treeza has somehow managed to find the elusive magic money Tree, and has cut it down quicker than David Dimblebly silencing and opinionated lefty, in order to pay the DUP a billion pounds for their support.

Like a shit new beer, Tory Lite will be weaker and taste a little bitter. Having thrown away their manifesto quicker than a pile of incriminating MP paedo files (excuse the pun) they’ve basically turned into a one issue, Brexit obsessed party. Like Nigel Farage’s birthday celebrations.

I don’t know the full the details of the deal, apart from that the DUP have actually expelled some of the less popular Tory pledges like a school age Paul Nutall caught chatting shit again by an angry P.E teacher.

I don’t think much will change though, we’ll still have a fucking austerity driven, divisive set of psychopaths in charge, hell bent on putting profit before people like fucking Ferengi caricatures, looking after their rich mates whilst the rest of starve and burn.

Will Treeza be here much longer? Who gives a fuck? She’ll just be replaced with another emotionless, rubber faced droid, when the time comes, which I’m guessing will be sooner than later considering she’s about as popular as a turd in a swimming pool.